Get Strategic About Social Media

Did you know that over the past year, America’s top brands have made improvements in how they use online branded communities to reach their customers? However, some opportunities for engagement remain untapped, according to a new report by ComBlu.

More brands are taking a strategic approach to social media engagement. Among the 251 online branded communities studied, managed by 92 brands: 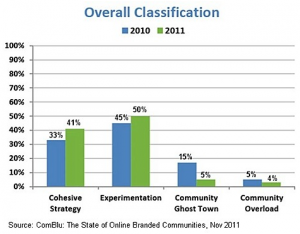 41% of brands now have a cohesive strategy for social engagement in which multiple activities roll into a single online experience, compared with 33% in 2010, and 20% in 2009.

The social experimentation stage is most prevalent: 50% of brands are experimenting with social communities, lacking a long-term engagement approach, using instead a series of one-off experimental marketing campaigns. That level is up from 45% in 2010.

Community ghost towns (unpopulated communities) now make up 5% of communities, down from 15% in 2010.

Community overload (multiple communities fighting for attention from the same audience) afflicts 4% of online communities, down from 5% in 2009.

About the data: The audit of 251 online branded communities among 92 US companies was conducted by ComBlu during the summer of 2011.

Sesame is an industry leader in integrated, cloud-based marketing and patient-engagement solution designed exclusively for your practice. We know that effective patient communication is vital to the success of your practice and the efficiency of your team. With Ortho Sesame, you can take your practice to the next level, allowing you to concentrate on what’s really important – your patients!